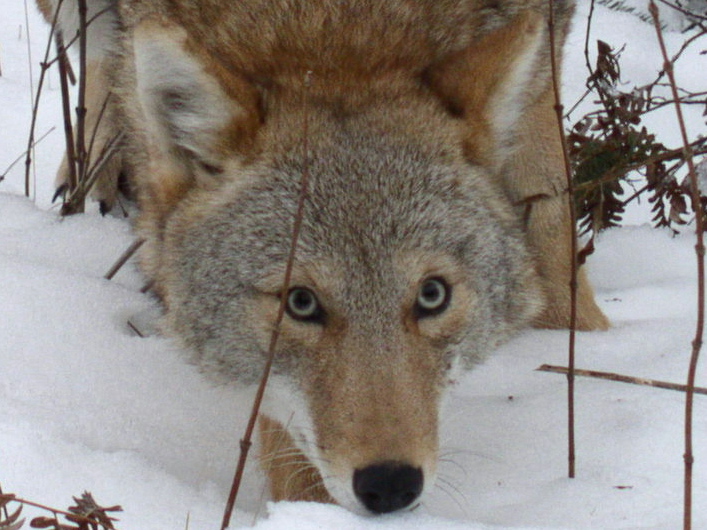 In 1999 I was to experience a devastating encounter with wolves.  Unknown to anyone in our neighborhood, a very large pack of wolves moved into the area just before lambing began.  Unaware of the threat, lambing commenced in the way I described under “Pasture Lambing Prolific Sheep”.  A key component to that system of lambing is that by the end of lambing all the sheep are spread out throughout all the pastures so as to enhance bonding between the ewe and her lambs.   This also helps manage forage quality during the period where most grasses try to go to seed.

Unfortunately set stocking ewes with newborn lambs also left us very vulnerable to predators. To give some idea of the predicament here is an aerial photo of our farm.  In addition to The 5 pastures shown, there were two additional pastures on a neighboring farm.  The pastures are all interspersed with woodland and swamps with thick brush providing excellent cover for predators. 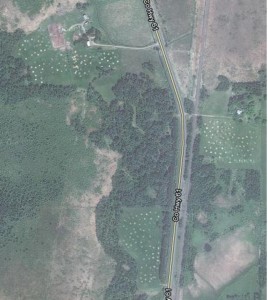 At the time I had four livestock guard dogs.  One guard dog was in charge of each area with a total of four different locations for the pastures.    This had worked for us during the 80s, and 90s when the predator population was relatively low.  What changed was the wolf population was growing rapidly during the 80s and 90s thanks to federal  protection.  The coyote population was also expanding due to high employment, and low fur prices during the 90s hence less hunting and trapping.  So by 1999 we were faced with a steep learning curve when a large pack of wolves  moved into the area. 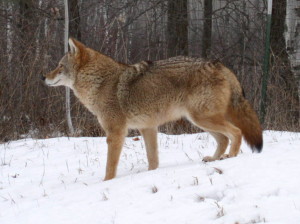 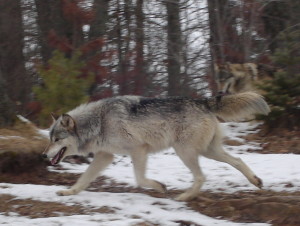 We were also to learn that the conclusions made in Yellow Stone about wolf and coyote populations did not hold true here in Minnesota.  Our coyotes not only stayed in the area, but they became  desperately hungry as wolves competed with them directly. We have since documented on game cameras that wolves, coyotes, and fox,  will visit the same pasture in the same night.

Unfortunately there was little to show authorities as there is nothing left to show when wolves depredate small lambs.  We therefore did not quality for compensation as we had no proof beyond just missing lambs (the ewes had been scanned prior to lambing so we knew how many to expect).

Desperate, I contemplated what my options were.  Knowing that shepherds had kept their flocks safe from wolves prior to modern times I reviewed just what is it that they do (besides adding livestock guard dogs) to keep the flock safe. 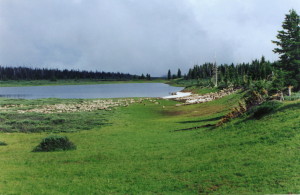 Photo of 2000 sheep in the flat tops wilderness area in Colorado.  The shepherd’s job is to keep the flock together to enhance the ability of the LGDs to guard it.

Lambing indoors is the option many choose, but doing so adds considerable overhead and operating  cost in a business with tight margins.  Hiring a herder for my relatively small flock was also not a viable option.  I settled on re creating what the herder does by using some modern technology. 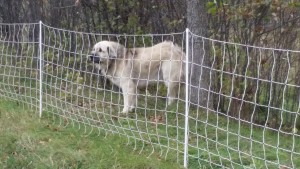 Portable electrified net fencing allows the flock owner to keep the flock and Livestock Guard dogs close together, enhancing the effectiveness of the LGDs.

I rounded up all my portable electrified netting and made a pen about one half acre in size, and put all of the sheep, and all four dogs inside.  The flock was still lambing at the time, and I was worried that there would be a lot of mis mothered lambs.  At this point the risk of loosing lambs to predators was a lot larger than that of loosing lambs to mis mothering, so I felt the risk was worth while.

To my surprise not a single lamb was mis mothered.  But I was faced with a problem, in less than 24 hours the flock ate up all the forage in the pen, and needed to be moved.  Hence a form of  mob stock grazing began on our farm.  Most importantly the depredation stopped over night.

With the threat of the large pack still present the following spring, I continued with the mob stock style of lambing but lambing morphed into what I call “lambing on the fly”.  This is where I drift lamb as I always have, with the pregnant ewes moving every one to three days to a new paddock, leaving behind the ewes who lambed in the past few days.  But what changed is instead of set stocking the newborn lambs for 30 days, I now only give the lambs 3 days to mother up.  They then are joined by the older lambs and follow the drop bunch.  To visualize this imagine three contiguous paddocks made of portable net. The lead paddock has the pregnant ewes which are lambing, the next paddock has lambs that are 1 to 3 days old, and the third paddock has all the ewes with lambs older than 3 days old.  Each time I am ready to move the pregnant ewes, first I move the oldest lambs in with the younger lambs, then I take down the fence where the oldest lambs just came from.  This fence then leap frogs ahead of the pregnant ewes.  I then drift the pregnant ewes into the new paddock, leaving behind the ewes that had lambed. 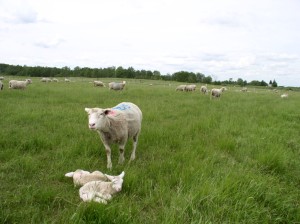 ewes tend to stay close to their newborn lambs for the first several days, making it relatively easy to move the remaining pregnant ewes on to a new paddock

A few key details to make this work:  By moving the older ewes and lambs in with the younger ones, we do not disturb the younger lambs.  It is important to make this move at least every three days.  Usually by the fourth day there will be ewes that have lambed that will end up drifting to the new paddock leaving their lambs behind.  The larger the flock, the more often they need to be drifted to avoid congestion.  Moving mid morning seems to always work the best.  The ewes are full from the early morning graze and less likely to rush the gate.

Grass management is a key part to deciding when to move. Lambing is usually taking place during the spring flush, when the palatability and nutrition is high, but in a mob stock grazed flock, it is very easy to leave too little behind for the two groups of ewes that have lambed, so it is important also that the timing of the moves be made to assure adequate grass is left behind for the 1-3 day old group, and the 3+ day old group. 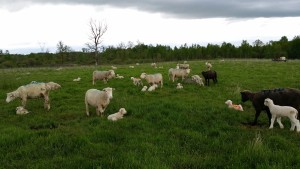 after the morning drift, ewes with newborn lambs are left behind

Through out lambing I keep at least four livestock guard dogs with the drop group.  The dogs are able to move freely between paddocks, and the entire area covered is much smaller making it very hard for predators to approach the flock.

I have managed lambing in this manner now for 17 years, and it has weathered a number of high predator population swings, including packs of 8 to 10 wolves, and a pack of six very clever coyotes.  The only time I have had losses is when I have strayed from my plan, or one time when a storm blew the net down, while the dogs took shelter with the drop bunch on the other side of a hill.  These losses have been inconsequential. 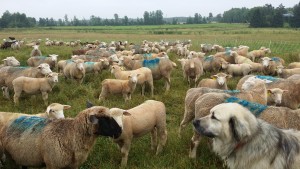 At the end of lambing the older groups of ewes and lambs simply merge with the last ewes that lambed and now form one large group.  Grazing management is now simplified.  The flock is moved as often as necessary simply by putting up fence ahead of the flock, and encouraging the ewes and lambs to move over to the next paddock.  By two weeks of age, lambs are fairly easy to move as they have been moving since 2 or 3 days of age. By six weeks old the lambs are ready for big moves, such as a couple miles or more. 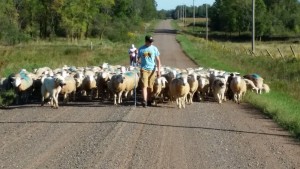 what was totally unexpected were the improvements to pasture vigor  and flock health that followed this simple management change to prevent depredation.   The changes to pasture were profound, with pasture production improving several fold and with pastures becoming very resilient to drought.  The new management system which included long rest periods between grazings, also eliminated the need for deworming ewes and lambs through out the summer.  How and why these improvements occurred will be covered in a future blog.