Not every guard dog puppy born, is going to work out as a successful guardian. Knowing when to give a dog a new job assignment can be extremely difficult for the new LGD owner. There are dogs that, despite a great effort from the flock owner, may never become a useful working dog, while others, if given some time to grow up, can turn into outstanding dogs. How do you know when to call it quits and find a new job for the dog?

There are probably three stages of development where the dog’s progress should be evaluated with respect to its age and decisions made. The first is the 8 week old puppy, next is at about one year of age (just past puberty), and the third is at 2 1/2 years of age.

Unfortunately most of the important LGD traits we look for such as trustworthiness, protectiveness, and attentiveness are not evident until the pup reaches puberty. Until then, a puppy is, well, just a puppy behaving like a puppy. 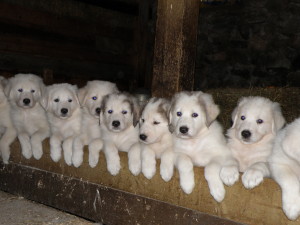 However, there are two behaviors that can be evaluated early before the pup leaves the litter. One is simply testing for shy vs aloof pups. A shy pup that is likely to develop into a fearful dog should be evident by 6-8 weeks old, and will be the pup that retreats to the sheep or to the farthest part of the pen in the presents of people and shows obvious fear (shaking, whites of the eyes, fearful expression) when approached. The Aloof pup simply dislikes human attention but is not a fearful dog. This pup may also retreat to the sheep or the back of the pen, but does not show intense fear when approached, just simply avoidance. The difference is confidence, the aloof pup is confident, when caught. Aloof pups can turn into outstanding LGDs and are often easier to keep with the flock than more people oriented pups. The shy or fearful dog can present some management problems and is more likely to bite when pressured and should be avoided. Shy or fearful pups should be neutered.

The other early test is the chase instinct. We do not want our LGDs to have a high drive to chase objects as they will tend to be stimulated by running sheep. The earlier a dog exhibits the chase/bite routine , the stronger and more problematic those behaviors will be throughout the life of the dog.   Pups that are inclined to chase moving objects at 8 weeks of age are not likely to be good candidates for living amongst sheep or goats. Rolling a tenis ball into the pup nursery (with little outside disturbance so pups can focus on the ball) is a good test for any inclination to chase. The pup that is drawn to the ball, to chase and pounce, and maybe even bite it has a high level of chase instinct. Pups with a chase instinct should be directed to jobs that do not involve sheep or goats, and should be neutered as this is a very undesirable trait in the LGD. A good LGD response to the ball, is to sit and watch the ball, or to approach the ball (slowly) to investigate the ball. The pup that approaches may investigate the ball by biting, but this is not the same type of bite as the pup that chased and pounced on the ball.

So at 8 weeks old, we can sort out the shy, fearful pups, and the pups with a chasing instinct and find them suitable homes without sheep. The rest of the litter moves on to sheep 101, which is a long period of puppy rearing with sheep in a secure pasture suitable for the age of the pup, where they will learn how to stay with their flock, will learn (from 6 to 12 months of age) how to move with the flock (by moving the fence), and will interact and socialize with the sheep (especially important from 4 weeks to 16 weeks of age).

Any pups that miss out on the early socialization period and that have not seen a sheep before 9 weeks of age, will be more difficult to train as a LGD.   Even 9 weeks of age is pushing the socialization window. A pup that is introduced to sheep too late will not have as intense a desire to stay with the flock, and may behave inappropriately toward sheep later in life. Now I am not saying that all pups introduced to sheep after 9 weeks of age will fail, I am only saying that the job of getting the pup to stay with the sheep, and to behave properly with sheep will be more difficult. Farms that have very demanding situations (where dogs must remain with their sheep 100% because of roads, neighbors, or other hazards, should only consider pups that were reared with sheep since 4 weeks of age.

By 6 to 10 months of age, usually some form of juvenile play behavior toward sheep will emerge that can result in chasing, pulling of wool, grabbing the lower leg, or even chewing (of ears or wool). This behavior is fairly common when it occurs at puberty. Play behavior with sheep is a signal that the pup is well socialized with sheep. Usually this play behavior is a form of ‘tag’ that puppies play amongst themselves if reared as a group. The shepherd needs to minimize this play to prevent it from becoming too rough and to prevent it from becoming habitual.

The age at which this play emerges is important. As mentioned before, the earlier that some undesirable behaviors emerge, the tougher they are going to be to solve. For example if a dog reaches 10 months of age before it ever rough housed with a sheep, odds are it will pass from this phase very quickly, especially if the flock owner helps by changing the environment so as to discourage rough housing.   But if this play behavior starts at 3, 4, or 5 months of age, then this play will be a management issue for the pup for a long time to come. Precocious development of rough juvenile play behavior toward sheep (chasing, pulling/biting ears or wool, plucking wool off the rump, or grabbing sheep by the lower leg) before 6 months of age, should be grounds for concern (and neutering). Often this early development might signal a predatory tendency.   There are a number of ways to address this behavior, but just be aware, if the pup developed this behavior prematurely and shows an intense desire to chase and bite at an early age, it probably is not going to be a trustworthy adult.

It is important to distinguish an innocent game of tag, from predatory behavior. Pups that focus intently on the sheep they are chasing, and that are not easily distracted by a shout , or that show a tendency to head off the sheep just like a border collie would, have a predatory instinct and will not be trustworthy as adults. 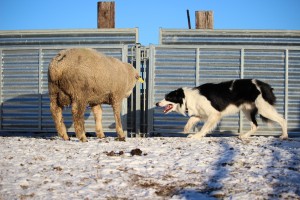 border collie using eye, and stalk,  to cause the ram to move away.  We do not want to see this in our LGDs

The key here is the age at which this behavior develops and the intensity of the behavior, in particular whether or not the pup shows ‘eye’. Some mild disorganized chasing and rough housing that can result in minor wool pulling, or grooming behavior that results in some chewing that develops at or after puberty is usually only a passing phase that a dog can be trained out of. Usually this behavior is very easily interrupted and will often stop on its own before the flock owner can intervene. Occasionally juvenile dogs may accidently kill young lambs from just handling them too much or aggressive grooming, but this damage is usually quite accidental and is more of a blunder as compared to damage caused by an intentional bite. Despite having caused such damage, most of these dogs will still develop into a trustworthy adult if handled appropriately.   But predatory behavior is always insurmountable and will result in a dog that will continue to do damage throughout its life.

Complicating the evaluation of juvenile behavior is boredom. Most definitely bored puppies are going to play more, and play rougher. From 4 months to 18 months of age, be sure to give young juvenile LGDs lots of room to explore. Having a few acres to explore and a ground hog in a wood pile to keep in check, will go a long ways to reducing juvenile play with sheep. I usually will not recommend a young LGD for flock owners on properties less than 20 acres, and never should the juvenile LGD be confined for a long period in a small pen with livestock.

Also evident by one year of age, is how well the dog will stay with the flock. The requirements of each farm are different. A small flock which is kept within 1/4 mile of the house, will not need a dog that stays close to the sheep as the dog will be able to guard the farmstead and the sheep from the back porch. But the flock owner who’s sheep move more than 1/4 mile from the house needs a dog that will move with the flock and always keep it within sight (or scent). By one year of age, it should be evident if the pup will stay with the flock.

As the dog matures, the juvenile behavior described earlier will subside. Usually by 18 months of age, most dogs seem to have a sense of purpose (to guard the flock or the territory the flock resides on) and play behavior diminishes as they turn their energy toward detecting and thwarting predators. Actually having predators can go a long ways to maturing a dog. I’ve noticed that pups as young as 6-8 months of age can mature very quickly into their adult roles when predators are visiting the area they are in, thus greatly diminishing that juvenile rough housing period with sheep. 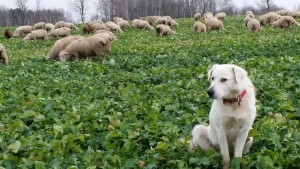 When to call it quits with a LGD can be a very hard decision. Especially after all the hard work invested in the dog. The pup’s rearing can have a large impact on the outcome. Throughout the pups life, it is important to respond to undesirable behaviors by making changes to the pup’s environment. Along the way, take a hard look at the pup, at 8 weeks, one year, and 2 1/2 years. If you are seeing consistent problems at each stage, you are surely looking at a dog who is better off with another job. But most dogs who show promise at 8 weeks of age, and that may go through a little rough spot at around one year of age, only to grow out of it by 21/2 years will make dependable LGDs. Sometimes the most effective predator deterrents were the dogs that created a few headaches along the way.