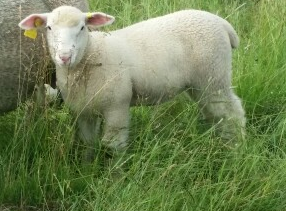 The Tamarack flock is a high health status flock and has been closed to incoming ewes since 1985. OPP eradication began in the late 80s and by 1991 the flock had four negative whole flock tests. Random sampling of cull ewes since 1991 has found no positives in the Tamarack flock. Tamarack is currently enrolled in the “Export Certification Program”. The flock is inspected annually by the USDA, and a prescribed number of ewes are slaughtered each year and tested for Scrapie. No scrapie has ever been detected or traced back to the Tamarack Flock.  The flock has been free of foot rot and foot scald since its inception in the late 70s. CL (Caseous Lymphadinitis) was eradicated at the same time OPP was eradicated in the late 80s through vaccination and culling. The Tamarack flock does have a mild strain of sore mouth that is usually of no consequence.